I’m Lena, with my boyfriend Flavien, we decided to visite Ireland for a road trip in camper van to 1 month.

Why did you choose to go to Ireland? How long did it take for you to plan the whole trip?

We chose to go to Ireland because it is Lena’s adopted country! She studied in Dublin and now Ireland has a big place in her heart. Flavien had never been there before, it was an opportunity for him to discover the country, which I know quite well.
We’ve taken a lot of time planning this trip. We wanted to consider all ways of traveling, even if the van life style tempted us more than other ways. It took us 3 years to gather all the necessary information, on the activities, the best periods for this or that, to evaluate the budgets. We were students and we wanted to make a long trip at the end of our studies. We saved up and once we graduated, we left.

What do you suggest to someone who wants to go to Ireland with a van?

It’s the best thing !
For me it’s the best way to travel to Ireland. There is an ease of travel for vans, the Irish are used to it and very open to this way of travelling the country. It’s a very well equipped country for nomads, in terms of laundries, water recharging and sewage.
The advantage of vans is the ease of mobility. In Ireland, the most beautiful landscapes are not necessarily accessible by public transport. The van allows you to discover the country at your own pace and to access less touristic and beautiful places.

What’s the thing you like the most about traveling with a van?

The thing we love the most about van travel is the freedom!
You can sleep in beautiful places, shower in front of crazy landscapes, wake up next to wild animals. For example, we slept in Killarney National Park, which is famous for its deer nature reserve, it was incredible!

How’s Ireland? Was it cold during the nights? What about the landscapes?

Ireland is a beautiful country! The landscapes are sublime, we are constantly amazed. There is a lot of greenery, hills, valleys, cliffs, lakes, rivers, all accompanied by the mythical Irish sheep! The sheep are mainly in the south, but the most amazing thing is that they are free!
Of course, the Irish weather is not a myth. There is often rain, but we have been lucky over a month we have not had much rain. Also, the temperatures were mild, we rarely had sub-zero temperatures. I think the coldest we had was 3 degrees when we woke up in the morning, we were in Dublin. Don’t worry, we’ve had worse! (On a trip to Morocco we had a night at -10 degrees!) Luckily the van is equipped with heating so we warmed up quickly! Also, we have thermal sleeping bags, especially for the cold temperatures. So we didn’t get cold. The most disturbing thing was the wind … we hate it !

Did you make some friends in Ireland? If yes, how did they behave with you?

We met a lot of Irish people. They are very welcoming with their hand on their heart, they are always there to help you. We didn’t make any friends as such, but we talked and met Irish people of all ages, it was very nice!
Also, we took advantage of this trip to see some of Lena’s friends who are currently in Ireland.

Did you find difficulties during your trip? If yes, which ones?

Of course we encountered difficulties, what would be a trip without difficulties!
The biggest difficulty we had, due to our way of traveling, is the bins. In Ireland, the inhabitants are taxed on their waste. The more they have, the more they will be taxed. As a result there are not many large public bins, unlike in France. We had a hard time getting rid of our rubbish bags, so we had to pay for them most of the time. Also, we had a hard time recycling. There is a lot of centenary, but it is the recycling of glass, not paper, plastic and cardboard. This is the first country I visit, which recycles glass, in 3 categories: brown glass, green glass, white glass.
Otherwise, we did not encounter any huge difficulties. In Londonderry, we had a hard time finding a car park to visit the city. Not easy to get a van in town. Moreover, we had just crossed the border between Southern Ireland and Northern Ireland, and for the first time of our stay, we got honked! Southern Ireland is friendlier than Northern Ireland.

Was it your first time on a van?

It was !
But it won’t be our last time! We are planning to invest in a van, which we will customize, to visit as many European countries as possible.

What road did you do? How many stops have you done?

We went around Ireland by the coast. Lena worked hard on the itinerary, she already knew several corners of Ireland. We considered it a good first itinerary to discover Ireland. Of course, we had some must-sees, such as the capitals (Dublin & Belfast) or some national parks.
Without counting the stops in between, we had about 35 stages. The schedule was tight but we knew it and we did it. Except for the sea trips which were all cancelled due to weather conditions. We had to go whale watching and visit the Skelligs Islands.
We’ll go back to Ireland, of course! We will have the opportunity to discover more about the country and its counties.

Will you do a road trip again?

Yes! We want to visit lots of countries!
We are currently thinking about a road trip (maybe in a van) in the Nordic countries (Denmark, Sweden, Norway).
Also, we dream to do a road trip in Portugal.
Crossing the country from north to south. We also dream of visiting the Dolomites in Italy, or Andalusia in Spain.
Our craziest dream at the moment is to visit New Zealand by van.
These are just thoughts at the moment, but if we have our own van, it will be much easier to make these thoughts come true!

We don’t regret our decision to travel by van to Ireland.
It was a wonderful trip, rich in discoveries and encounters.

Thanks to Lena Grouset for taking part to the project “Experience”.
We hope the best for you and your boyfriend.

Traveller around the world. 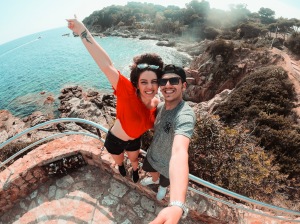 We always loved traveling. In march 2019 we started this journey and after a year we decided to create our travel blog.